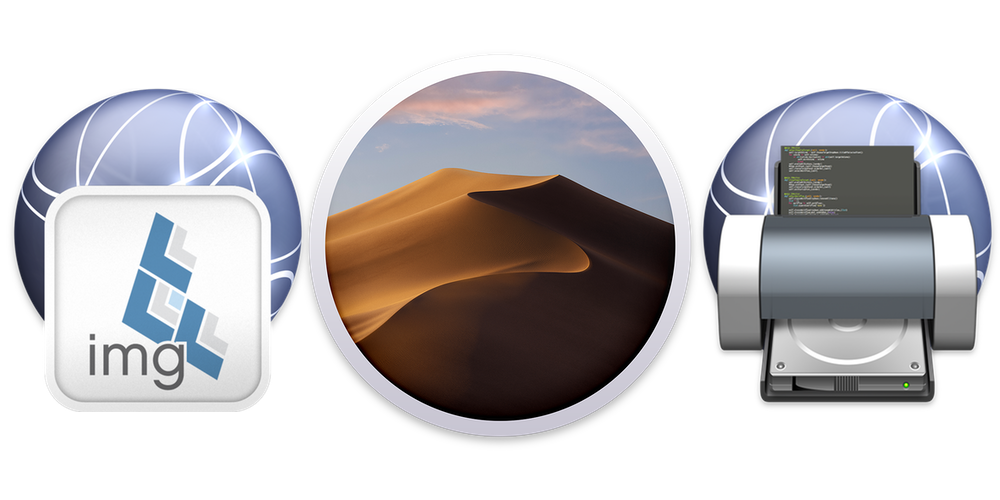 Below is why I have updated the apps, & why this is likely to be their last update.

This is due to AutoCasperNBI & AutoImagrNBI creating NBI’s from a pre-built OS.dmg.

So AutoCasperNBI & AutoImagrNBI can be used on Mojave to create NBI’s for older OS’s.

In testing, the previous versions of AutoCasperNBI & AutoImagrNBI would fail due to AppleEvents such as the below & TCC.

As the “tell application Finder” command was in a try block, AutoCasperNBI & AutoImagrNBI seemingly hit the error before any TCC prompts.

This was resolved by moving to more Objective-C calls, such as the example shown below, for the same result as the AppleScript shown above.

So there is a little want there. 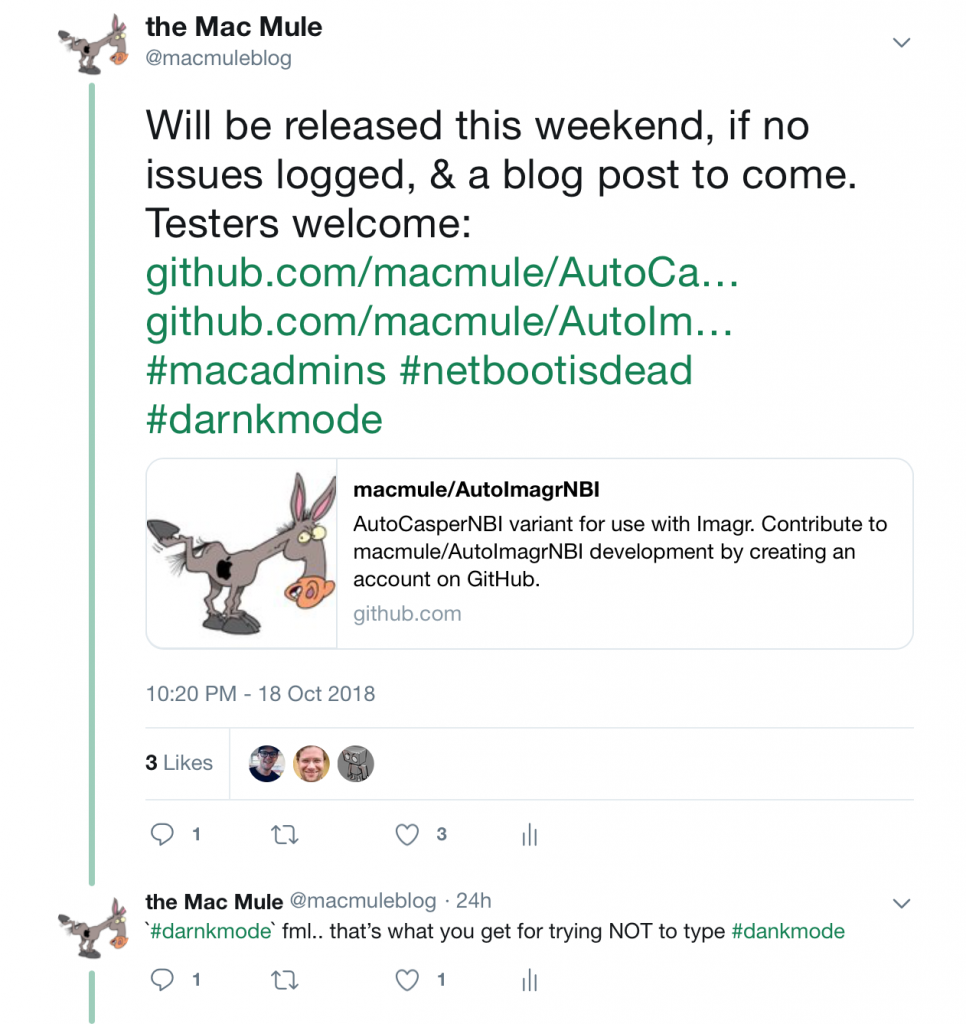 A major draw to Mojave is Dark mode.

Dark mode support can be as simple as compiling an application via Xcode 10 if your app uses all native UI elements.

Which both AutoCasperNBI & AutoImagrNBI do: 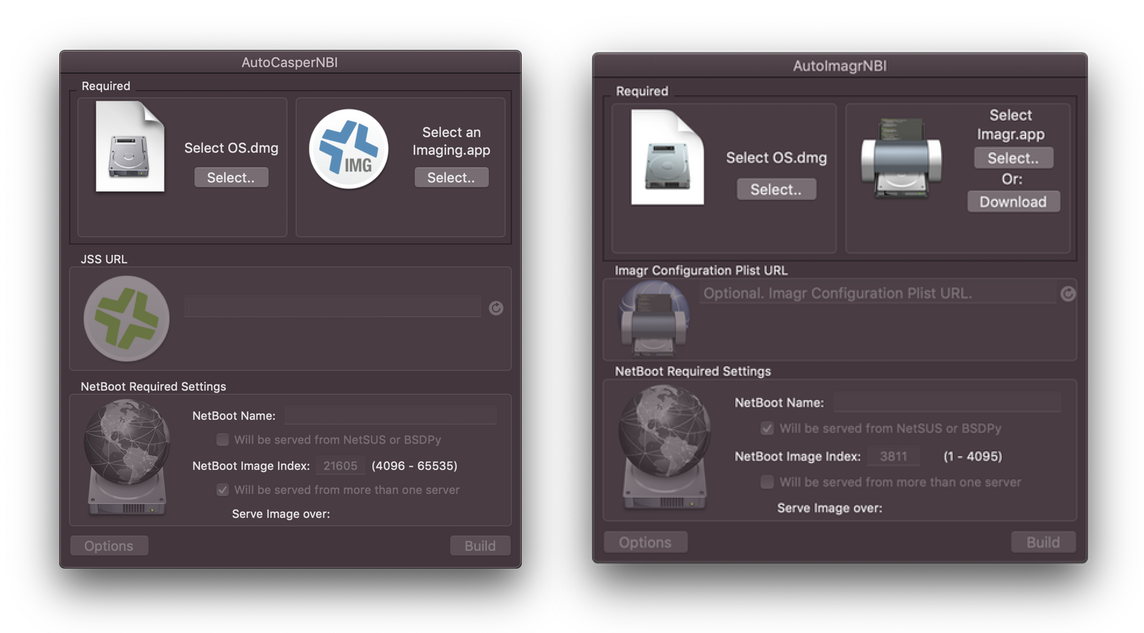 But NetBoot is dead?

A few months ago, Apple posted this KB. In which they detailed the numerous services which were to be removed from Server 5.7.1 (which has since been released), as well as alternatives.

The “Net Boot/Net Install” service was included, with BSDPy & NetSUS being touted as the alternatives.

The first alternative, BSDPy, was created by Bruienne. But he’s now at Apple so cannot contribute/maintain the project anymore.

The second alternative is NetSUS. I’m a “maintainer” of NetSUS. I say “maintainer” (in  quotes), as I’ve not contributed a line of code & instead the awesome Duncan McCraken has taken NetSUS from strength to strength.

So, I can still NetBoot Macs?

If you have an old copy of Server.app running or one of the above alternatives spun up which Macs can you NetBoot?

Macs which ship with a T2 chip cannot be NetBooted, as per this kb.

And with all the extra security features that the T2 chip brings, it’s only a matter of time before all Macs ship with a T2 chip.

So, there might be some Macs available at the time of writing which can NetBoot, but I’d be surprised if there was NetBootable Macs being sold in 1-2 years.

Whilst both AutoCasperNBI & AutoImagrNBI can create a restorable DMG for restoring to a USB stick etc, these DMG’s are HFS as this is the file system supported by NetBoot.

Ohhh, so imaging is not dead?

Not all Macs that were High Sierra compatible were compatible with APFS, but under Mojave all are.

So, imaging is only viable if deploying a HFS OS.

If looking to deploy High Sierra (to a APFS compatible Mac) or Mojave you need to move to away from Imaging to Installing.

Apple also doesn’t recommend imaging, with all their recommended methods are based on installing the OS.

Ok, what do I need to Install the OS?

Apple has some steps listed here.

If you’re looking to NetBoot to install an OS, you need a couple of things:

Sadly, as NBI’s created with AutoCasperNBI & AutoImagrNBI are NetBoot images. They cannot be used for installation based workflows due to:

The resultant restorable DMG is a copy of these NBI’s & so has the same restrictions.

Why not kill the apps off?

It’s been a helluva ride sing releasing AutoCasperNBI some 4 years ago.

Who’d have thought a conversation during a CCE, then a want to prove some mates wrong & a MacBrained Hackathon would have lead to this.

There is still some (limited) value in the apps, even if just to myself.

So i’ll keep them running for a few more months yet.

One thought on “AutoCasperNBI & AutoImagrNBI 1.5.0 – the final major updates”