For a number of years I have used the same Imaging workflow, during which time I thought the process was fairly common (with FSTAB being an exception).

However, after speaking to a few fellow Casper Admins it has become clear that my workflow isn’t as common as I thought. So the post below outlines what we do.

In Casper Admin we create a “Standard Configuration” often naming is “<OS Version> Base” as per the below; 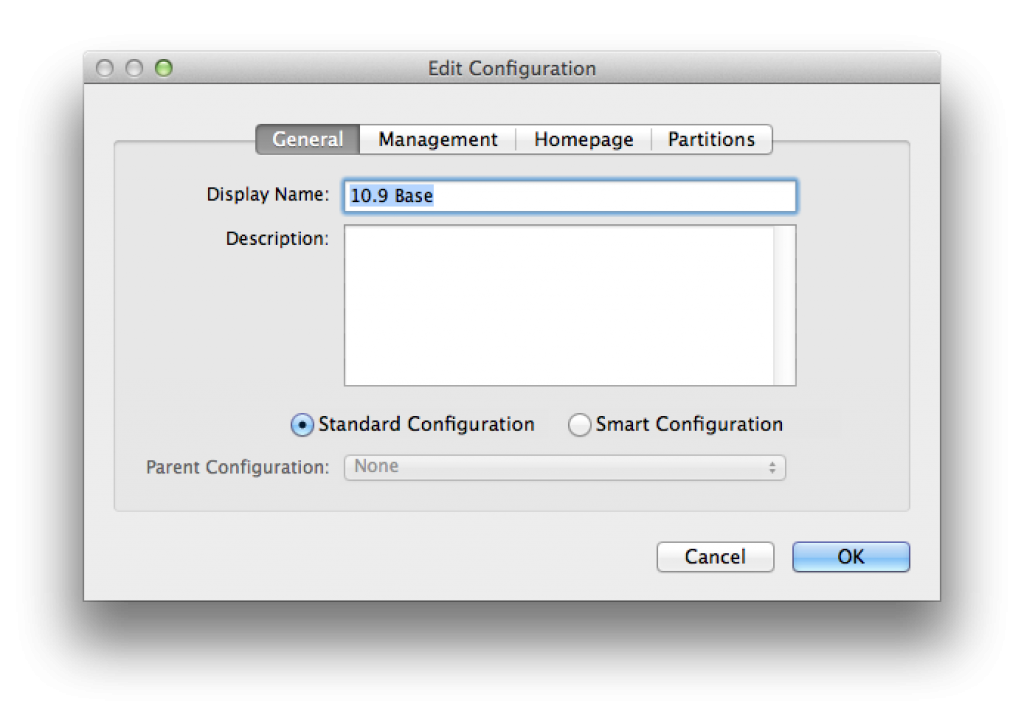 Under the “Management” tab, we specify the details of the management account: 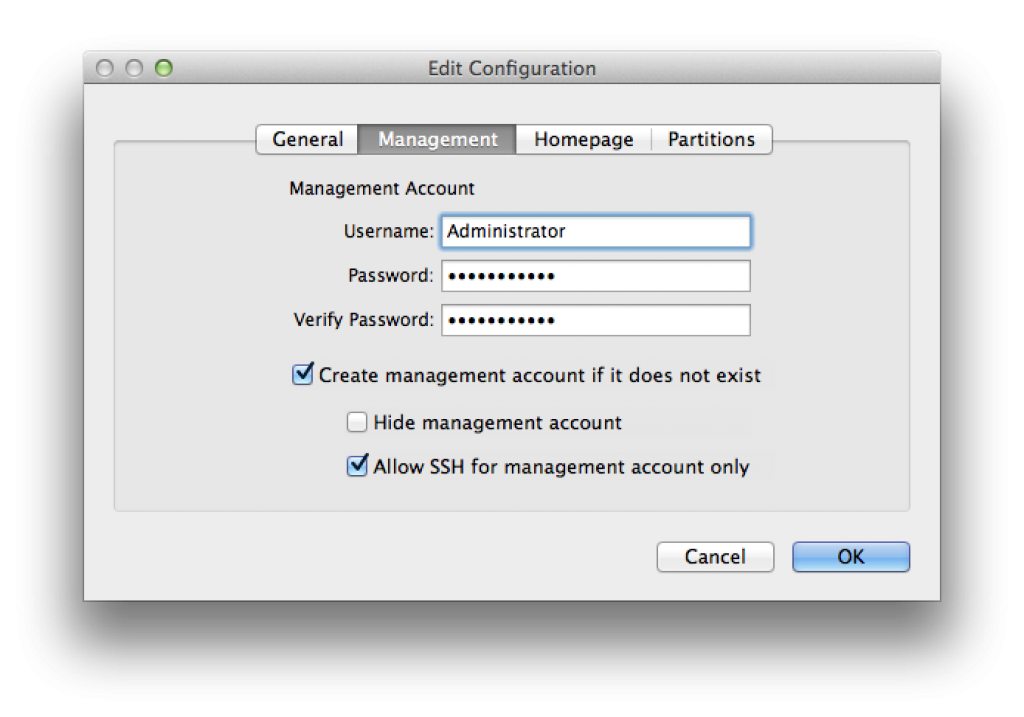 Then due to us using FSTAB to split the Macs HD into 33% Macintosh HD & 67% Users HD, we specify the creation of the Users HD partition under the “Partitions” tab as a Journaled HFS+ Volume with 67% or up to 670GB of the target drive. 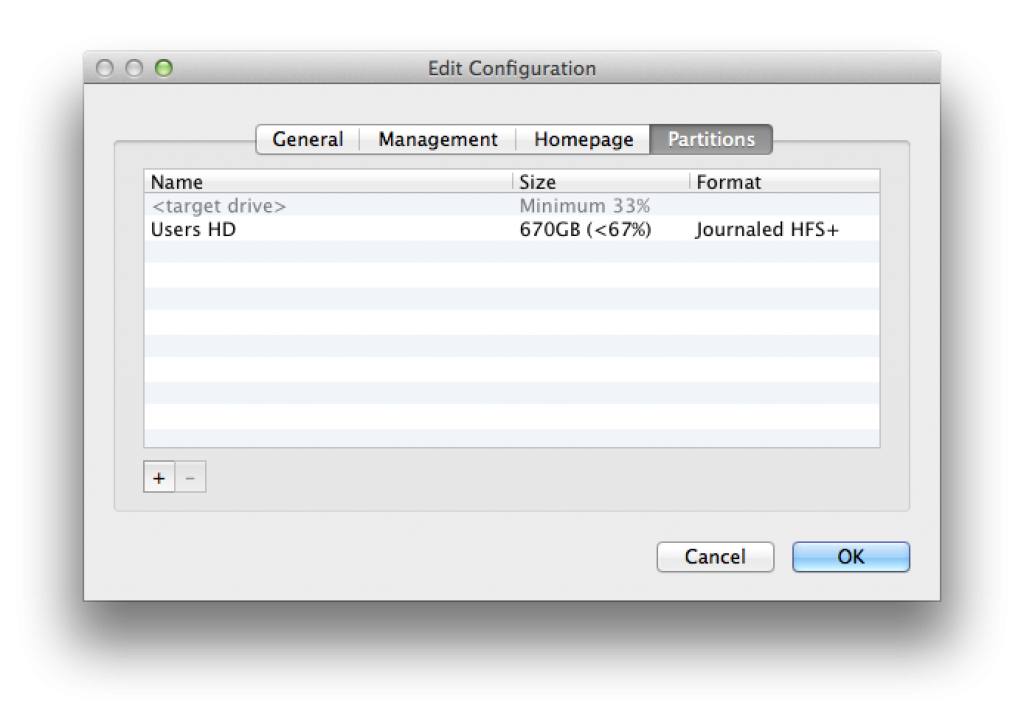 The nice thing about partitioning within your configuration, is that when you load up Casper Imaging on a non-partitioned Mac the first step will show the partitioning: 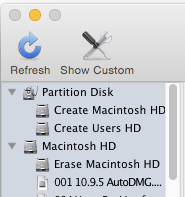 Whereas if the Mac has already been partitioned, (as when re-imaging), Casper Imaging will see this & this step will be skipped: 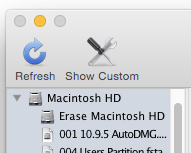 This preservation of partitions if great if using FSTAB to partition your Macs HD’s to have the user data on a separate partition as the data on that partition is then preserved.

When deploying an OS.dmg created either by AutoDMG or Casper Admin, the “Recovery HD” that is contained is also deployed & “Casper Imaging” will partition as needed.

This includes when partitioning as per the above, but when doing so the “Recovery HD” is not the last partition as you may expect.

The above is taken from my mac, as you can see the “Recovery HD” is the middle of the 3 partitions. Whilst this still works to boot into & to send lock or wipe commands to the Mac, it’s worth noting that FileVault2 will only encrypt the OS volume.

With the “Base Standard Configuration” created, it is then used as the parent for others, as shown below:

The content of these “Smart Configurations” is only 2 items, will all other items coming from the “Base Standard Configuration.”

As with anything within the JSS, timing is important. When creating configurations it’s important to set the correct priorities of items in Casper Admin as, trying to install updates for an application without it being installed will fail.

The first item is normally the OS.dmg created either via Casper Admin or AutoDMG. This DMG will have a priority of 1 set within Casper Admin.

Below is an example of what we follow for items, note we also prefix the items with their priority. 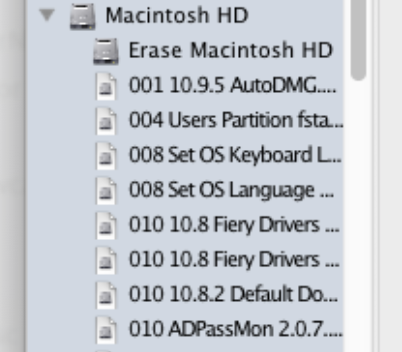 Generally we follow the below, this is a loose guide;

So as mentioned that’s a rough outline, & with Casper Admin having priorities of 1-20 we leave some free just incase.

Adding DMGs & PKGs to a configuration

The way Casper Imaging block copies DMGs means that we usually deploy DMGs to the target drive during imaging.

However as PKGs can have pre or post flight scripts as well as dependencies on whether or not they are being installed from the boot volume &/or have an active user session running.

So another rule of thumb we follow is to set each PKG to “Install on boot drive after imaging”. 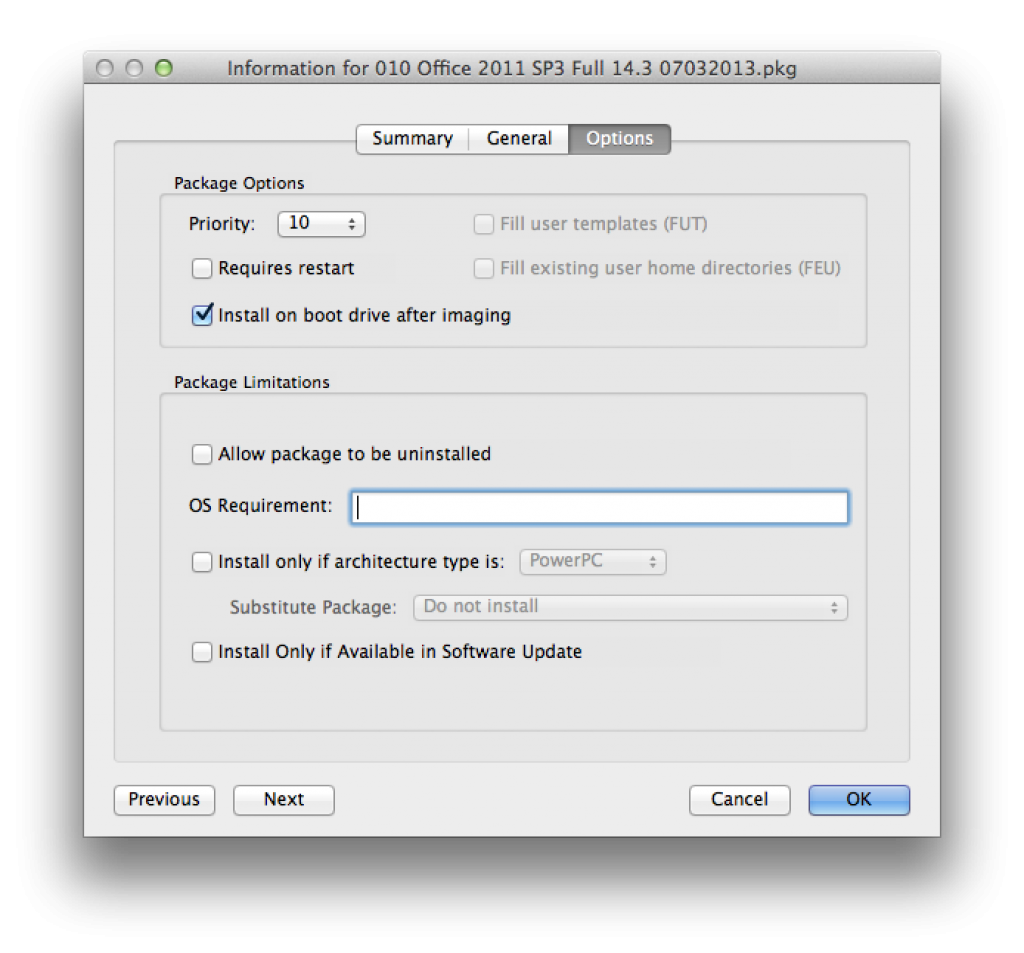 Casper Imaging will then cache these PKGs onto the target Macs HD, once restarted the target Mac will auto-login to an account called “Adobe Install” (this is a legacy account name).

Once logged into the “Adobe Install” account, you should see the below screen on the Macs screen: 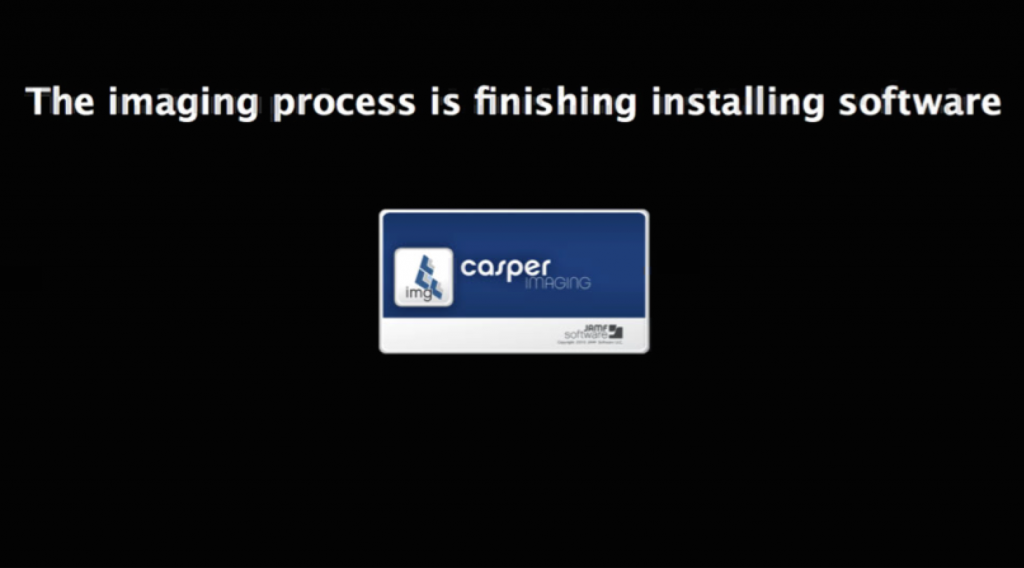 The Mac will now be installing all the cached PKGs, whilst logged in as a user account with no conflicting processes. 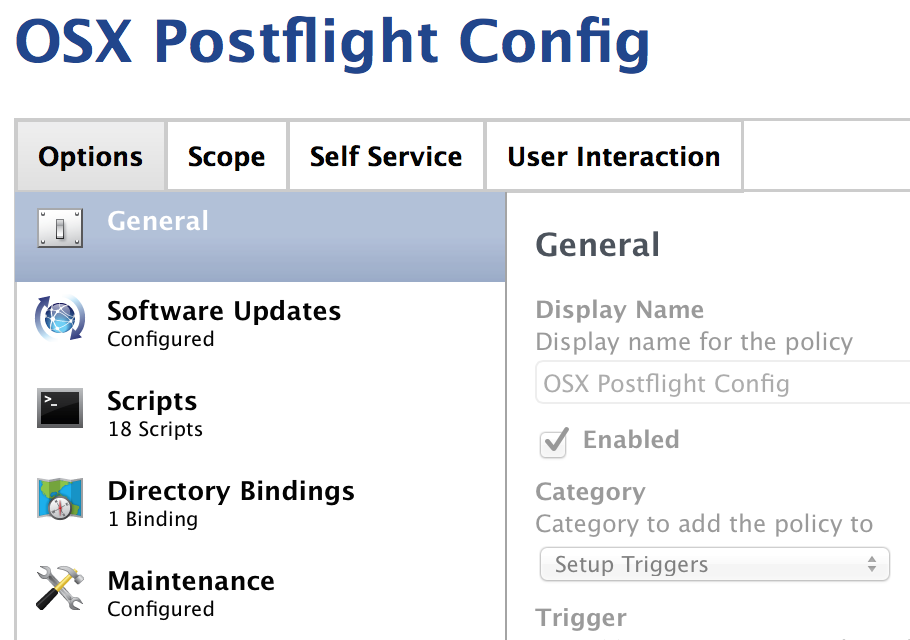 Any needed “Software Updates” are installed from the Network Segment defined software update server for the imaged Mac.

Next we run a collection of scripts: 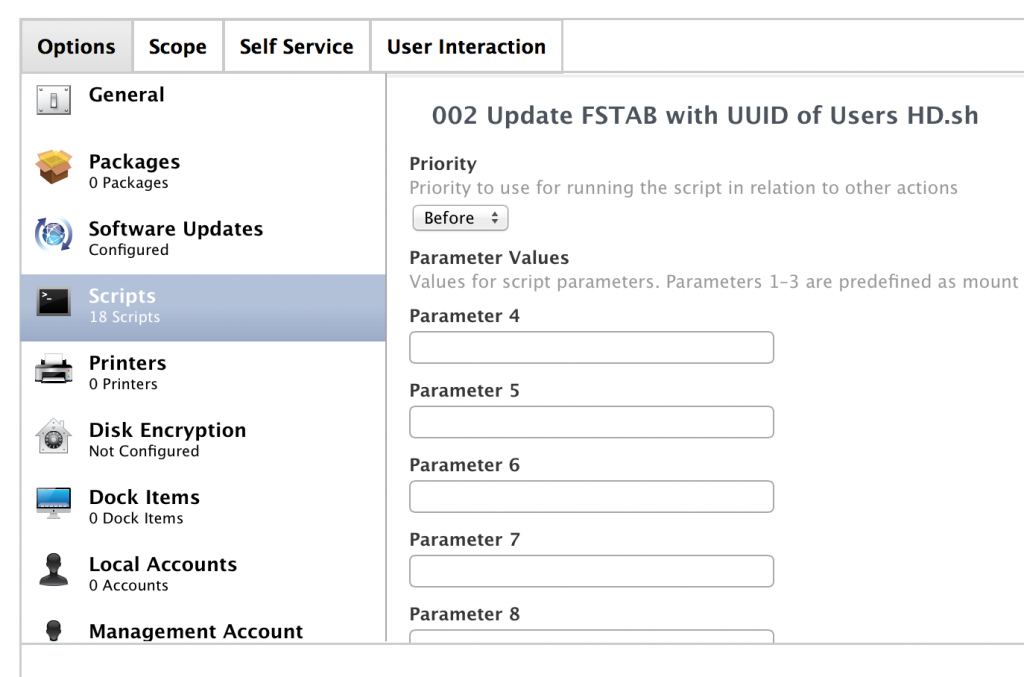 These are set to “Before” or “After” depending on what the script is, for example you could have a “Before” script that sets the Macs time to your NTP. Then an “After” script that does the “AD Binding”.

The only script of note is the below:

As you can see we use a number of  “Dummy Receipt” for various things, but in context of this post the “Management Level” values are:

The benefit of doing this, is that no policies are run on the newly imaged Mac until this file is in place & the Mac has ran an inventory update.

After the scripts have run we bind to our Active Directory: 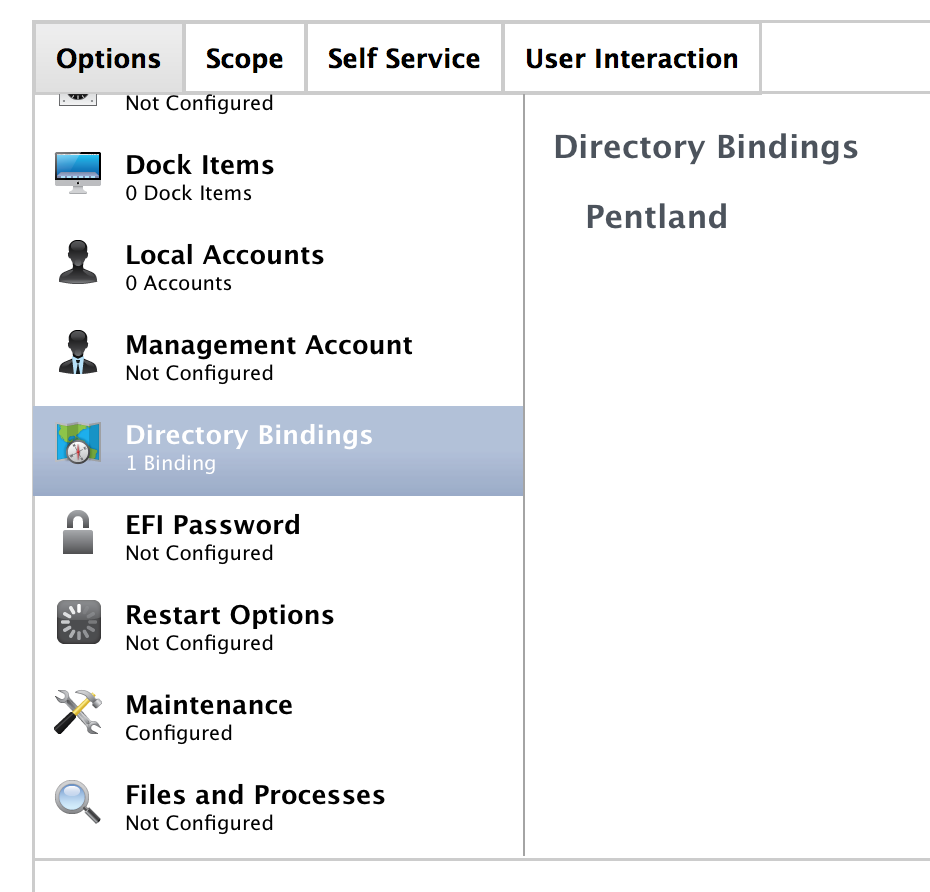 Lastly, we perform some maintenance tasks: 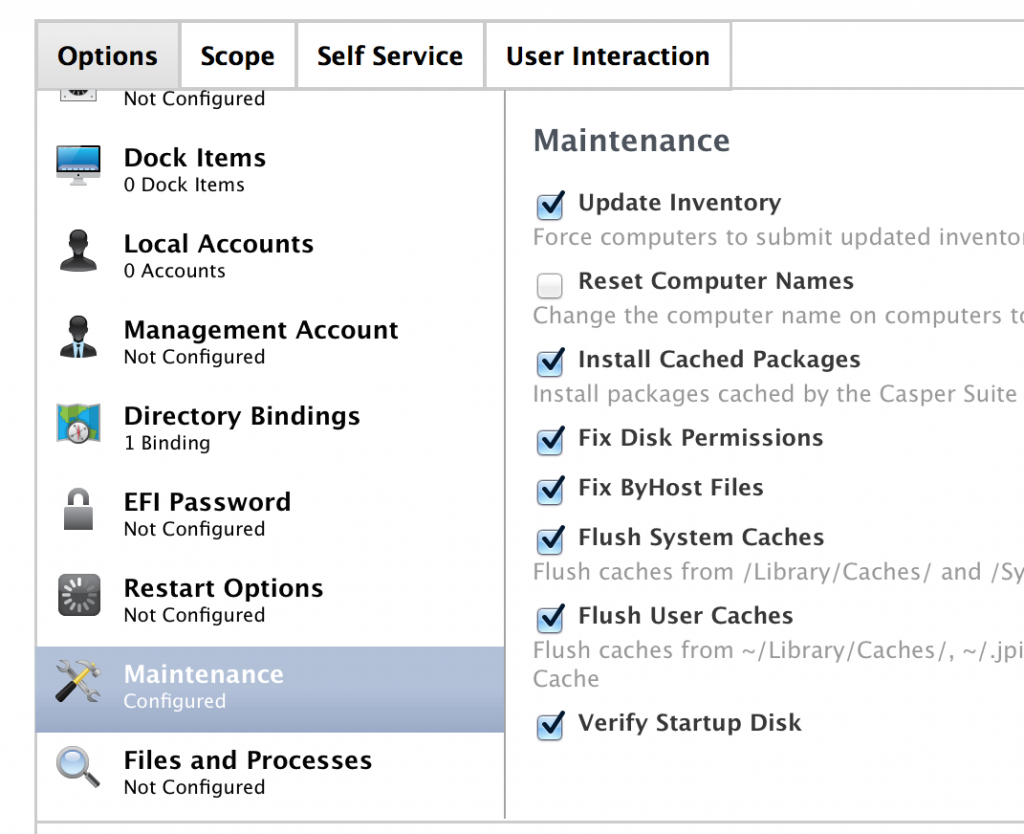 The Mac then restarts & pulls down the required “Managed Preferences” & “Configuration Profiles”.

As mentioned above, we create a “Dummy Receipt” & scope Smart Groups for polices using that value returned via an EA as a base for the group. Well we use  the same method is used when scoping “Managed Preferences” & “Configuration Profiles”, with the exception that we also scope via OS version.

The above workflow can also be easily tailored for when you wish to preserve the Macs shipped OS, this can happen if the Macs build is a bespoke “fork” of OSX.

In order to use the above when “No Imaging” do the following:

I hope you’ve found the above of some use, this workflow has remained largely unchanged since 10.6.x but with people querying how I do it & some potential changes are coming with Yosemite I thought it was about time I blogged it.

4 thoughts on “My Casper Imaging Workflow”